The Polish Lowland Sheepdog is known in Poland and Europe by the name PON, which derives from its Polish name – Polski Owczarek Nizinny, in the UK the abbreviation of PLS is used. Polish Lowland Sheepdogs have a rather chequered history with various versions of their origin. They were shaggy coated sheepdogs used for herding in the lowlands on settlements, close to the farm, considered as medium  herding dogs, were not bred as guards, however being watchful over their flocks had a tendency to be suspicious of strangers. They had a difficult progression into the 20th century and became almost extinct after the 2nd World War, only a few farmers kept them. However the PON was restored through the work of E.Kusinowicz and Dr Danuta Hryniewicz of the Kodergardy affix and the breed was revived in 1948/49.  The FCI recognized the PLS in 1959.

Dr. Danuta Hryniewicz pon Smok, is the ancestor of all PONs in the world today, he sired the first ten litters of PONs in the 1950s. 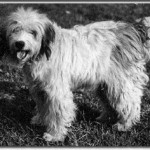 In fact, Dr. Hryniewicz considered Smok to be the epitome of the breed, with a perfect anatomical build and a wonderful temperament. Smok set the standard and type that was emulated by PON breeders for generations to come, and from which the first official standard for the PON was finally written, and accepted by the FCI in 1959. Smok is considered to be the ‘father’ of the modern Polish Lowland Sheepdog. His moderate build lends itself to working effortlessly all day long, running with ease to herd the sheep.