Ch Mybeards Hero is currently the TOP POLISH LOWLAND 2017 in the UK with many group placing’s at championship shows to date. 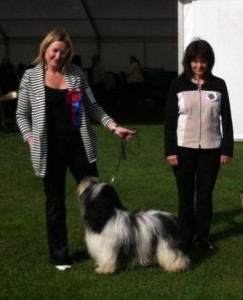 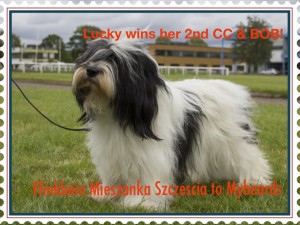 At City of Birmingham Championship show from an entry of 34 PONs our Finnish Import Lucky (Flinkbein Mieszanka Szczescia to Mybeards) won her 2 CC and BOB! Thank you to judge Mr Mike Lewis from the famous ‘Potterdale’ Bearded Collie Kennel. 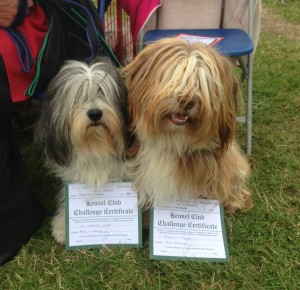 Top All-rounder Steve Hall judged the breed at the Welsh Kennel Club Championship Show and awarded Mybeards Choco his 1st CC at only 13mths old, Mybeards Hero won the Res Dog CC at 16mths old and Ch Mybeards Wish her 11th CC and BOB….Wish then went on to win Group 3 under Sue Garner! A great day for us in Wales!

At Leeds the lady responsible for importing the PON into the UK judged our breed so all exhibitors were very interested in the opinion of Megan Cook (Irwing/Butler). 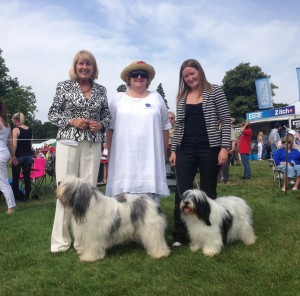 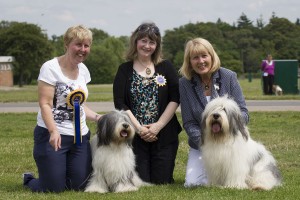 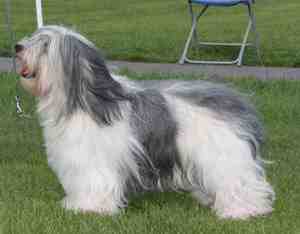 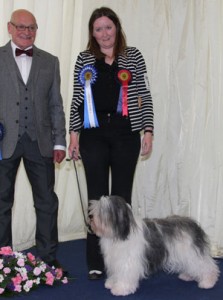 At the Bath Ch Show (May) Ch Mybeards Wish won Best of Breed under Mr Frank Kane and then Group 2 under Pastoral specialist Mr Barrie Croft.

At the Scottish Kennel Club in May the judge was breed specialist Bernie Watson, Sheila & Tony Sellars made up their 2nd Mybeards Champion with Mybeards Conclusion, gaining his 3rd and crowning CC. Mybeards Choco won Best Puppy & Puppy Group 3 under Mr Keith Nathan.

Dorothy with Kayla at the Club Show

Well done to Dorothy Dence and her Ch Mybeards Platinum winning the Bitch CC and Res Best in Show at the PLSC Champ show under Mrs Ann Arch. Kayla (Platinum) was in the Vintage Class being 12 years old and is the only PLS to win a Best Puppy in Show at a General All Breeds Championship Show in the UK (Birmingham City) to date.

At Paignton Ch Show (Aug 2013) Ch Mybeards Wish gained her 8th CC under Mr Rodney Oldham, and was shortlisted to the final 8 in the Pastoral Group. 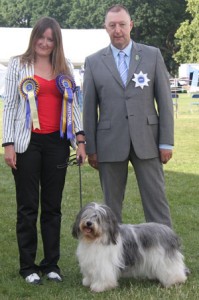 At Windsor Championship Show (June 2013) Champion Mybeards Wish won Best of Breed under Allyson King and was shortlisted in the Group.

At Blackpool there was a change of judge where Mrs Jill Peak stepped in to officiate. Her winners included Mybeards Conclusion, owned and shown by Sheila & Tony Sellars who was awarded his 1st CC! Ch Mybeards Wish won BOB and her 5th CC and went on to win Pastoral Group 2 under Mr Barrie Croft…a great day!!

At Bath (May) we did not show however Mybeards Lord Millthorpe owned and shown by Anne Springthorpe won BOB from Puppy!

The judge at WELKS was Mr Vic Salt who awarded the CC & BOB to Ch Mybeards Wish and BOS to Dorothy Dence’s Ch Mybeards Romeo.